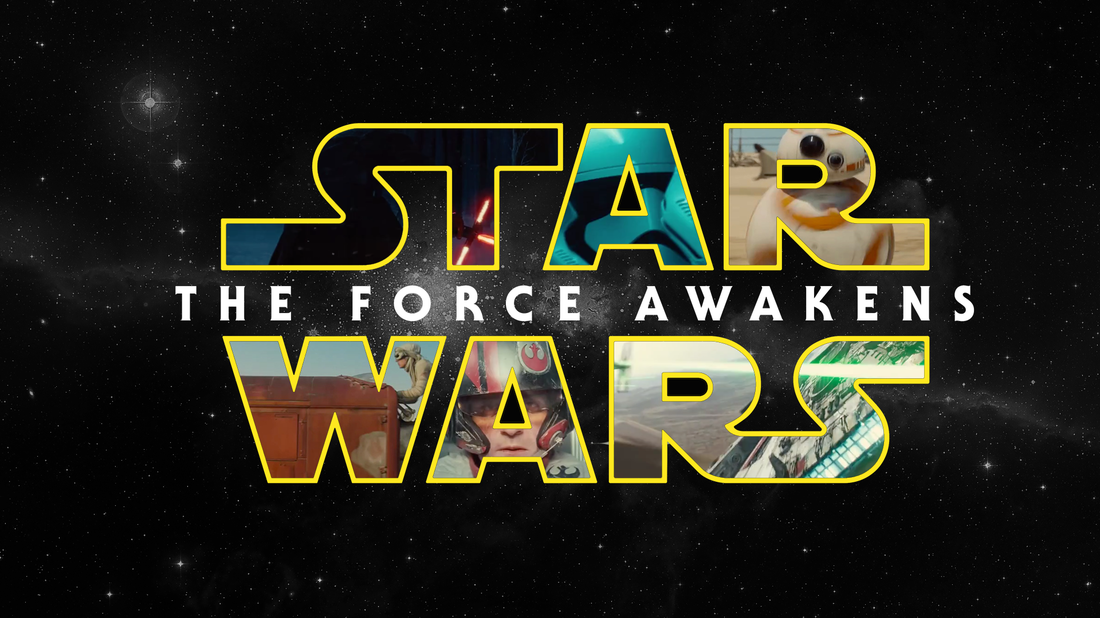 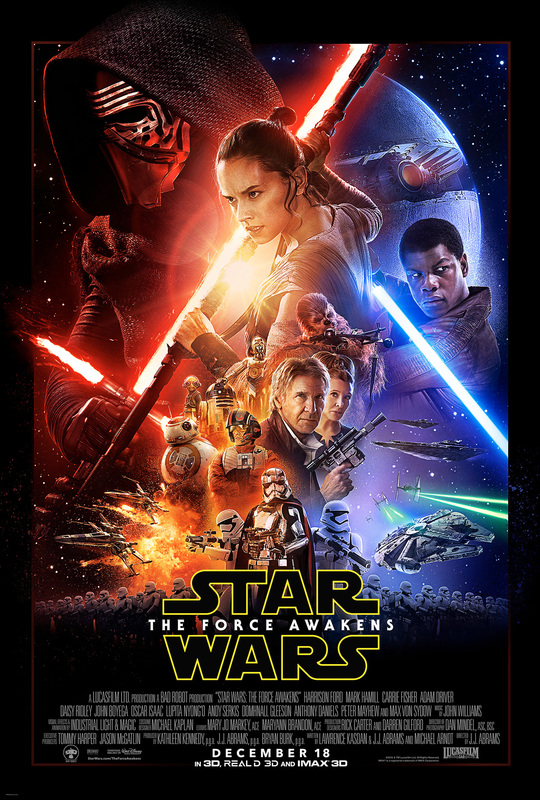 Star Wars: The Force Awakens has earned $57 million in Thursday previews, beating the record of $43.5 million set by Harry Potter and the Deathly Hallows: Part 2 in 2011. 3D made up 47% of the total, with IMAX numbers at $5.7 million from 391 screens. That almost doubles the IMAX preview record of $3 million. The film will play in 4,134 theaters this weekend, itself a record for the month of December.

Early Rentrak estimates for the first day are now north of $100 million. Like all Friday grosses, this includes the Thursday preview shows which in The Force Awakens’ case was $57 million.

If this number holds — and there are indications it could actually go much higher — it means that the film will blow away the opening-day record, which was set by Harry Potter and the Deathly Hallows: Part 2 at $91.1 million in 2011. Disney has been keeping expectations for the weekend at the low end and considers $200 million likely at this point, with most industry analysts expecting it to blow past Jurassic World’s $208.8 million opening weekend record that was set in June.
Review By: Jeffrey Harris

I believe the great problem with the prequel trilogy is that suffers from the problems prequels tend to possess. The litany of flaws from the prequels have already been debated and discussed ad nauseam for years, so it’s a lot harder to get excited about a story where the end game is perfectly clear. Not to mention, prequels are less interesting. Case in point, the classic trilogy. Did anyone really care how those events happened? The original films did a good job of explaining historical events, and the audience was able to fill in the rest of the dots. The Force Awakens is essentially the first Star Wars film to take viewers into uncharted territory since Return of the Jedi. Everything from this point on is a fresh, new story. The saga is no longer mired in the past, but moving forward. Coincidentally, Maz Kanata (Nyong’o) has a line in the middle of the film that sums up this feeling best (this line has already been uttered in the trailers and TV ads, so it’s not a spoiler): “The longing you seek is not behind you; it is in front of you.”

The Star Wars Legends, formerly the “Expanded Universe,” were special because they helped satiate and offer an outlet for our love for Star Wars for many years. The stories offered us a return to a time long ago, in a galaxy far, far away. It was exciting to see the beloved heroes take the next step in their journey. Unfortunately, the prequels never offered any such revelations.

Everyone who loves Star Wars finds their own individual and emotional experience with the franchise. However, it is hard to ignore how The Force Awakens personally speaks to me by finally offering the next chapter in this universe. The hero of the story is a young woman named Rey (Ridley), a scavenger who is stranded on a harsh and unforgiving environment. She’s waiting for something or someone that’s not coming. Then there’s a catalyst that rips Rey from her doldrums and coerces her to stop living in a standstill. Rey is finally given the opportunity to move forward and stop living in the past. Director and writer J.J. Abrams, along with classic Star Wars trilogy alum Lawrence Kasdan, have done the same for me with a true cinematic Star Wars sequel.

In the intervening years since Return of the Jedi, the Empire has risen again in the form of a fascist group called the First Order. The New Republic does exist and has allowed the formation of a military unit called the Resistance to battle the First Order’s violent tyranny. The First Order, with the Supreme Leader Snoke (Serkis) as its sinister leader, is a formidable enemy. It appears to be a rogue splinter group of the fallen Empire. Despite the fall of Palpatine and his Empire, the First Order was still able to survive like a festering wound. The rot of that festering wound has grown so dangerous, it now threatens to engulf the entire galaxy, thanks to a new and terrifying weapon of mass destruction: Starkiller Base. One thing the Resistance and First Order do have in common is that both parties are searching for something, and that is where the story begins. Ace Resistance pilot Poe Dameron (Isaac) gets privileged information first, but he is promptly taken captive by the First Order’s megalomaniacal attack dog Kylo Ren (Driver). Fortunately for Dameron, a Stormtrooper (Boyega), later dubbed Finn, has decided to abandon his post, and the two make a daring escape. These events put Finn on a collision course with the young scavenger Rey and Dameron’s spunky droid BB-8, for a thrilling adventure with many familiar faces along for the ride.

One of my main concerns regarding this film as a sequel was whether Abrams and Kasdan would try to reveal way too many cards before they are ready. The original Star Wars films essentially define the cinematic trilogy format, but audiences embrace them as a three-part story. Thankfully, the film does not try to outdo everything that has come before. Star Wars films never got too mired in the past. They generally dealt with what was going on in the present time of the story. Just as in the original trilogy, there are hints and ideas of what took place, but Abrams and Kasdan don’t try to turn this into Encyclopedia Star Wars. If there are blanks to fill in, let the actual Star Wars encyclopedias, visual dictionaries, animated shows, new comics and books do just that.

Credit to Abrams because he is an actors’ director, so he gets very good performances out of his stars. To be perfectly clear, I do not entirely hate the prequels. There are some interesting elements and details, but the acting performances and dialogue were stilted and downright awkward. There were acting moments in the prequels that were so embarrassing that it’s mind-boggling these scenes made it into the final cut. It’s a stark contrast to how A New Hope worked so hard to serve its plot and pacing. The acting for The Force Awakens is much more natural and organic. It’s hard to relate to Hayden Christensen as Anakin Skywalker due to his weirdly bizarre, awkward and wooden performance. Ridley as Rey, and Boyega as Finn, play much more interesting, relatable characters, without all the weird awkwardness of the prequels. The dialogue does contain bit more punchy, modern style than the classic trilogy. That is a tad jarring at times, but the moments of levity are well-placed.

Without giving much away, Kylo Ren is a fun evolution of the Darth Vader archetype. Ren is short-fused and prone to anger, which makes him a lot more interesting. In addition, he has an internal conflict that’s played off very well. Kylo Ren’s internal conflict is actually a fresh interpretation to Star Wars mythology and the Force that is quite intriguing to watch unfold. Driver fulfills this conflict and the juggling emotions of this character very well.

The film does perform a bit of a balancing act in terms of fan service. There is sense that Abrams was a fan who was highly disappointed by the prequels, so he’s making up for it here in his own way. That fan service comes into conflict with the film’s story — not in a bad way, but in a way that possibly could have been realized in a tighter fashion. For example, a certain character meeting is a bit awkward, considering the circumstances of events. There is also a huge major turning point with huge ramifications for the entire Star Wars universe that is somewhat brushed aside by the plot. One can technically describe this film as the broad strokes of that event, and other sources will address the minutiae. This turning point can also possibly be forgiven, considering how the original trilogy dealt with somewhat similar events.

If I would give the story one other flaw, I wanted a little bit more of Isaac’s Poe Dameron. Dameron is one of the coolest new characters of this film, and he could very well be this franchise’s Han Solo or Star-Lord. That said, Dameron could have had a bit more to do here. After this year’s Celebration, there was a sense that Rey, Finn and Dameron are the new Luke, Leia and Solo of this trilogy. That’s not quite the case with this film.

The trade-off, though, is that Dameron’s agency in the plot comes at the cost of Harrison Ford’s return as the one and only Han Solo. It’s great to see Ford back as Solo, and he is very much Solo. Solo and Chewbacca (Mayhew) are found in an unexpected place. There is a great sense of loss and self-imposed exile for Han. Technically, there could a be prequel that explains how all this happened; but this is another instance where the audience can already understand and piece together what happened. Somewhere along the way, something went very wrong for the glorious heroes of Endor. Han was a pirate who, despite his best efforts, became a hero. Unfortunately, even heroes have bad days. Han had a very bad day that both he and General Leia (Fisher) are still reeling from and have not yet recovered from. However, after Han meets Rey, Finn and BB-8, he can no longer stay in a self-imposed rut.

Ridley and Ford actually have a nice relationship and in this film, and it’s one of the story’s more rewarding aspects. Their journeys in the story are almost parallel. In many ways, both are in a very similar place. Each character is haunted by ghosts of the past, and they struggle to move forward to their great destiny.

The film looks absolutely fantastic. Abrams does a good job of pushing the world and mythology of Star Wars forward without getting too wrapped up in fancy toys and gadgets. Some might have pointed out how often the prequels came off as odd because the technology was so much more advanced and even more futuristic than the future times of the prequel trilogy. Abrams and his design team achieve great success in pushing the concepts of Star Wars forward but not too forward. The look and feel of this universe comes off as a somewhat more natural progression from the original trilogy. In addition, it’s nice to see action scenes in a Star Wars film that are actually happening on a real set, rather than in an overly clean, pixelated and fake-looking environment. The combination of practical sets vs. CG is much more balanced than the prequel trilogy.

In addition, I was still worried I knew too much about the film with the recent barrage of TV spots, featurettes and new, international trailers. Thankfully, I believe Abrams and Lucasfilm did a tremendous job keeping a lot of details close to the vest. There are still plenty of surprising and eye-popping moments throughout this film, which really served in improving the first-time viewing experience.

With the prequels now firmly in the rear-view mirror, Star Wars: The Force Awakens finally moves the saga forward instead of backward. J.J. Abrams has taken the franchise to a place where it really needed to go. It’s a place where Star Wars has not been for a long time: Parts Unknown.

​A journey for a new generation of heroes has begun with Star Wars: The Force Awakens. It's finally OK to let go of the prequels and embrace Star Wars again. Abrams tells a fun and engaging story with likable heroes and great action. The story does have some minor issues because of Abrams and Kasdan attempting to put together a new script in about six months. However, they still managed to create a satisfying cinematic experience that is truly the often imitated, but never duplicated, Star Wars experience. May the Force be with you.