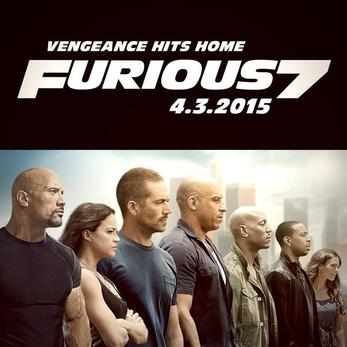 Editor's Note:
Today's movie review is brought to you by a good friend of mine, whom for professional reasons, can not have his name posted in conjunction with movie reviews. But he felt so strongly about this film, he had to give his review. So here it is, enjoy, and look forward to more from " Mr. Marvel".

Let me start by saying, Furious 7 is fun and exciting film you all should go see. But wow is it massively over the top.

Now of course everyone will say 'But it's a movie'. Look, they had a military grade helicopter flying and shooting up downtown LA., and since when is Vin Diesel Superman? He literally threw Jason Statham 5 feet. Dwayne Johnson flexed a cast off.

Come on, just no.

The best way to enter this movie is to realize your about to watch a cartoon.
Now that I've vented about my few problems let me say I had so much fun watching this insane movie.

This is easily the most fun movie I have seen since John Wick. Furious 7 gives you everything from the moment it starts. The moment you see how bad ass Jason Statham is, your in. Beats The Rock and is on Dom's ass from the second he shows up.

Fast forward through the movie a little to them being in Abu Dhabi. Tyrese is quite hilarious at the big party scene. Something else that makes this movie so good is that everyone gets a moment in the movie. Naturally Vin Diesel gets multiple moments, but let's be real it's his movie.

Ludicrous, their tech guy, got to be a bad ass. Not only did he drop a few guys he got to do it protecting the gorgeous British girl they added. Paul Walker's character beat Tony Ja twice in this movie. You would think with a cast this large they wouldn't get individual moments to shine.

The cars in this movie are so beautiful they bring a tear to your eye. I must say I love Dom's choice of American muscle. As a fan of Mustangs and Chargers I always pay more attention when his cars show up. And the hyper car that they drove through the buildings. If your a car person this movie is a a glimpse of heaven for you.

Now I must say I love how they decided to send Paul Walker off in this movie. They could have easily killed his character multiple times but they didn't. Instead they made him the third toughest person in the movie. In this movie we see him be a cool dad, beat Tony Ja in a fight, and out run a military drone.

I must state that if I did not know Paul Walker was no longer with us it's extremely difficult to even notice. I don't know if it was make up cgi or his brothers look that much like him. But great job.

And the final scene of just Brian and Dom just driving side by side racing once more was a beautiful scene. And then Brian just takes a left to go back to his family, and they show a montage of Paul Walker. It was an amazing way to send off someone you love. Almost would bring a tear to your eye.